Stuck at home, unable to do the things you had planned? Don’t worry, there are other things you can do now! And first of all, do not lose your cheerfulness. If you’re looking into new ways to boost your Spanish, we collected a playlist of catchy Spanish songs with good vibes & high sing along quality to cheer you up. (On this list you will not find the more popular and well known like Despacito, Con Calma or La Tortura, nor golden oldies). So get your speaker, earphones or just use your phone and enjoy our 15 best Spanish songs to boost your Spanish!

This playlist comes in handy for everybody. Do you already speak Spanish? These songs will definitely get you in the dancing and singing mood. Are you currently learning Spanish? Put away your books and learn new vocab & expressions through unconventional but more fun methods, such as lyrics or series/movies, learn Spanish with Youtube Channels or take Spanish lessons Online. If you are a beginner in this beautiful language, no doubt these songs will motivate you to learn more!

Check out our playlist “15 Spanish songs to boost your Spanish” and add the songs to your Spotify or YouTube playlist. Read the lyrics while singing, look up words you don’t know, and you’ll learn the lyrics and their meaning within no time!

Juan Carlos Ozuna Rosado, known by his father’s last name Ozuna, is a Puerto Rican reggaeton and Latin trap singer. In this song he sings ‘Síguelo bailando, que la música no pare, como a mí me gusta que la noche no se acabe’ which translates to ‘keep dancing, don’t let the music stop, I would like the night to never end’. A perfect song to describe the feeling when having a fun night out!

All of the artists of this song are Puerto Rican. Lunay might be a new name for you, since it’s an artist on the rise. He has stated that ‘his songs do not encourage violence or denigrate women.’ He is a Christian who believes that he doesn’t have to support violence just because he makes Urban music. This song is proof of this statement, since it’s about a woman who is ‘soltera’ which means ‘single’. She’s not ready for commitment or a wedding and yet she’s fine on her own!

These Spanish artists are singing about somebody who’s driving them crazy. They are singing ‘Pero me tienes aloca, intentando pero no consigo’ which means, ‘But you make me crazy, I’m trying but I don’t get it’. This chorus is so catchy!

This collaboration had to automatically result in a song with a contagious vibe. The lyrics are literally about moving your body. If you ever hear this song in a nightclub, put your hands in the air when you hear this part: ‘Toda’ la’ mano’ pa’ arriba (Muévelo)’!

‘Me Rehúso’ (I refuse) is a song by the Venezuelan singer Danny Ocean, about a former valentine crush of his. The lyrics are cute, he sings ‘Solo dame tu mano y confía en mí, si te pierdes solo sigue mi voz’ which means: ‘just give me your hand and trust me, if you get lost just follow my voice.’

Annuel AA is also Puerto Rican and made this song with American famous singer songwriter Romeo Santos. ‘Ella quiere beber’ sounds nicer than it actually is, because it’s about a girl who’s drinking because her boyfriend left her and she wants to forget him. ‘Y por eso se va a rumbear’ means, ‘and that’s why she’s going to party’.

Two Colombian guys collaborated to create this interesting song. Maybe you’ve heard of the expression ‘que pena’ which means, too bad/what a shame. This song is about a girl asking him if he remembers her name, despite his attraction to her he cannot remember it and feels embarrassed.

This videoclip is a must watch! Bad Bunny dresses up as a girl, and acts like a girl saying ‘yo porreo sola’. Porreo derives from the verb “perrear” which is how the Puerto Ricans describe dancing on reggaeton (very close to each other). It’s also a song about women empowerment: she can dance alone and doesn’t need anybody else.

You’ve probably heard of Don Omar? He is a Puerto Rican reggaeton singer and actor. He is sometimes referred to by his nicknames El Rey, and King of Kings of Reggaeton Music. He paired up with the Dominican singer Natti Natasha, famous for Sin Pijama, Criminal and more. Together they made a song about falling in love but having trust issues. Natti’s singing: ‘Me gustas pero tengo miedo de fallar en el amor’ which translates to, ‘I like you, but I’m scared of love going wrong’.

This Colombian Canadian singer, songwriter and record producer is singing about toxic love. This song is a bit more ‘tranquilo’ in comparison to the rest of this playlist, which makes it easier for you to understand the lyrics and sing along. ‘Me esta matando’ means ‘It’s killing me’. (The present continuous tense in Spanish is made with the verb estar + gerundio (present participle).

These are just a few of the many great and catchy Spanish songs: 10 Best Spanish songs to boost your Spanish!

Read the lyrics, sing along, repeat and you will sing fluently in Spanish faster than you think 🙂

7 Reasons to Learn Spanish This Year 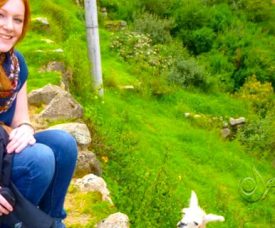 6 reasons to consider Peru for your Gap Year 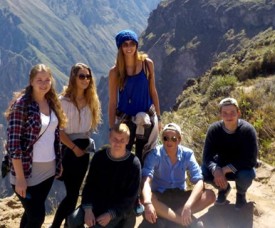 Volunteering in Peru: A Complete Guide to Organizing Volunteer Work 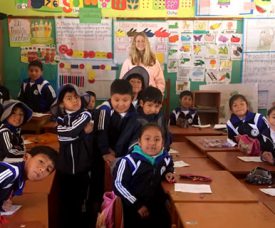