6 Festivals that will put Peru on your Map

6 festivals that will put Peru on your map

If there’s one thing Peruvians know how to do, it’s party.

With an epic 3000 festivals held every year, the Peruvian calendar is packed with celebrations – an explosion of colourful parades, music, dancing in costume and eating and drinking.

Expect to see anything from locals dressed up as Spanish colonists wearing hideous blue-eyed masks with long hairy beards, to religious icons being paraded through crowded plazas as once were the mummies of Inca rulers.

Peru’s biggest festival is Inti Raymi just gone by on June 24, a celebration of the Inca Sun God and winter solstice.

But if you’re thinking about studying Spanish in Peru and want to coincide your visit with a festival, there are plenty to experience right throughout the year. 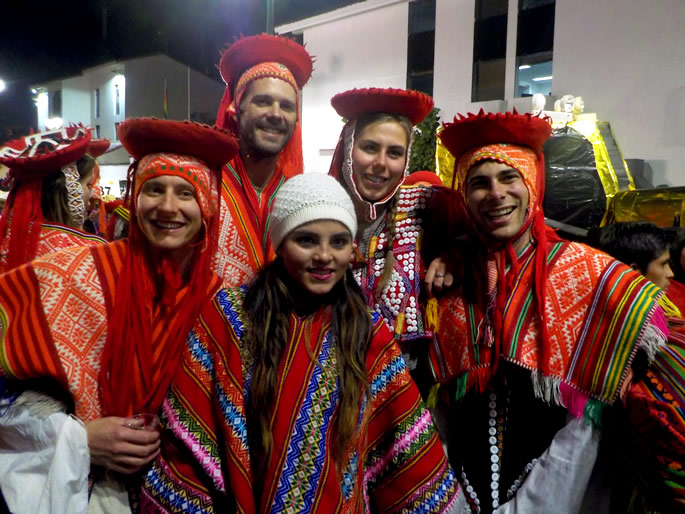 Here is a round-up of some of the best:

The Virgin of Candelaria (February)

Tens of thousands of dancers and musicians take to the streets in one of South America’s biggest cultural festivals in Puno, on the shores of Lake Titicaca. The festival celebrates Puno’s patron saint, and Puno’s Quechua and Aymara legacies in a vibrant party with dances and rituals. The festival is linked to the pre-Hispanic agricultural cycles of sowing and harvesting, as well as mining activities in the region. The dance of the demons, or diablada, the main dance of the festival, was supposedly dreamed up by a group of trapped miners who resigned their souls to the Virgen de la Candelaria in their desperation.

On the south coast of Peru you’ll find Ica, a small city which celebrates a tasty annual tradition, Fiesta de la Vendimia. This traditional wine harvest festival is celebrated with processions, dance and most importantly, wine. Expect parades, contests and plenty of grape stomping. People drink Pisco, Peru’s flagship drink, cachina and, of course, wine. Wineries wait for you with open arms, you just have to follow the “wine road”. 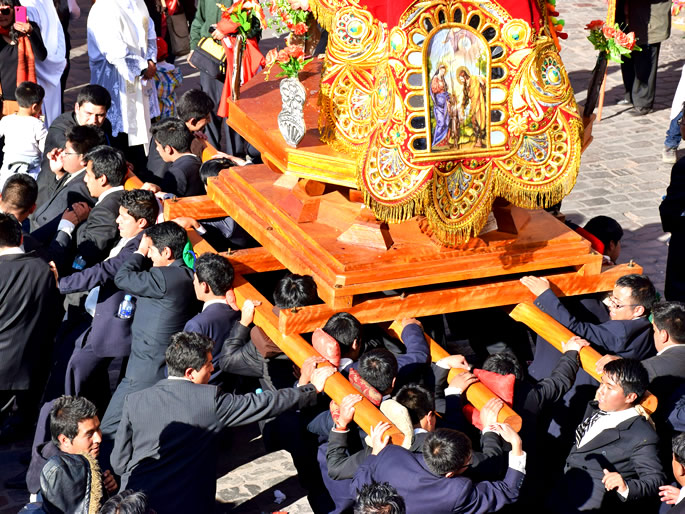 Semana Santa, or Holy Week, takes place from Palm Sunday to Easter Sunday with spectacular daily processions across many parts of the country including Cusco, Ayacucho, Arequipa and Huancayo. In Cusco on Easter Monday, the city honors its patron saint, El Señor de los Temblores, or Lord of the Earthquakes. This patron is extremely important to Cusquenans due to the belief that the statue miraculously stopped an earthquake in 1650 as it was being removed from the church to protect it. 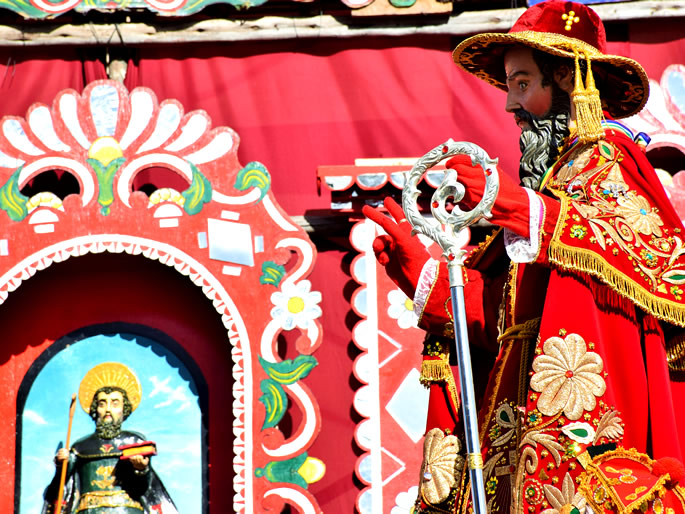 Corpus Christi is celebrated across Peru, but the fiesta is most impressive in Cusco. The festival represents 15 saints and virgins, organized in several processions arriving from different places to the Cathedral of Cusco in order to “greet” the body of Christ, 60 days after Easter Sunday. The night before the main day 12 typical dishes are prepared and consumed including cuy (guinea pig) and chicha (local corn beer). Corpus Christi kicks off the “Fiestas de Cusco”, an entire month of celebrations in Cusco. 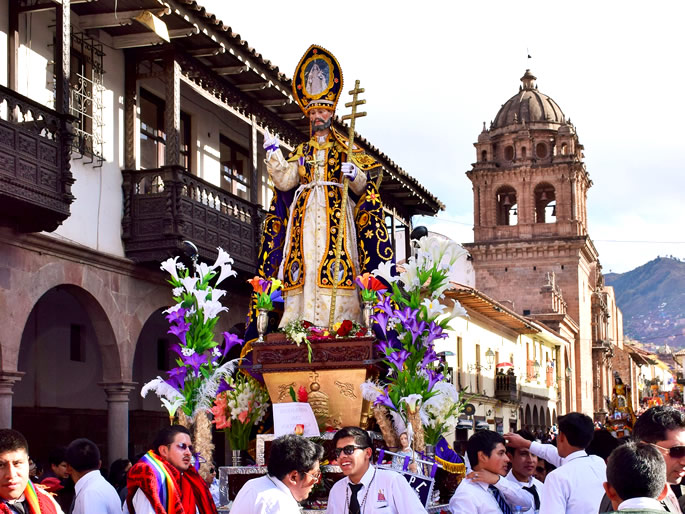 The biggest festival on the Peruvian calendar is Inti Raymi, which takes place in Cusco in honor of the revered Incan sun god. The festival coincides with the winter solstice and harvest time, when the sun is farthest from the earth. Inti Raymi was first celebrated in 1412 and ancient Incas would gather each year to honor the sun god and pray for his return. Still today, thousands of locals as well as Peruvian and international tourists take to the streets in a colourful celebration that includes dancing, singing and elaborate cultural re-enactments. 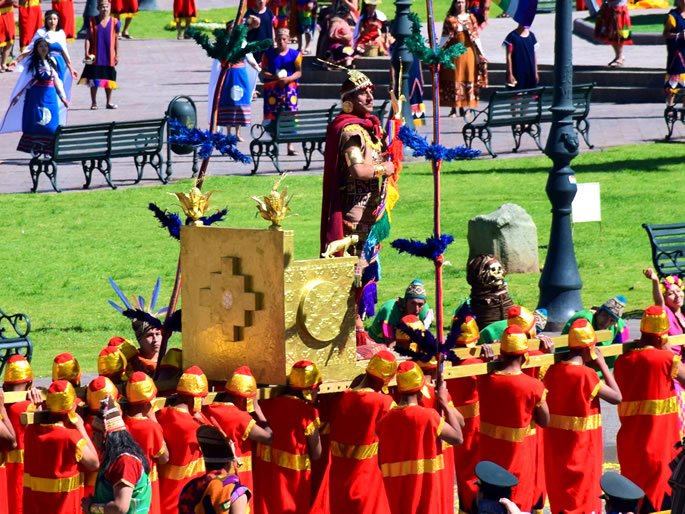 This is a celebration of the founding of Puno by the Spanish conquistadors and involves a fascinating re-enactment of the appearance of Manco Capac and his sister Mama Ocllo, who, according to legend, rose from the waters of Lake Titicaca to found the Inca Empire. A major procession leads from the shores of the lake to the town stadium. Dances and music pervade the city during festivities. Another beautiful opportunity for cultural immersion during the month of November is the Día de los Muertos in Southern Peru. On this day the death are honoured: People go to the cementries with food, dance and music and remember their relatives. Many typical Peruvian. 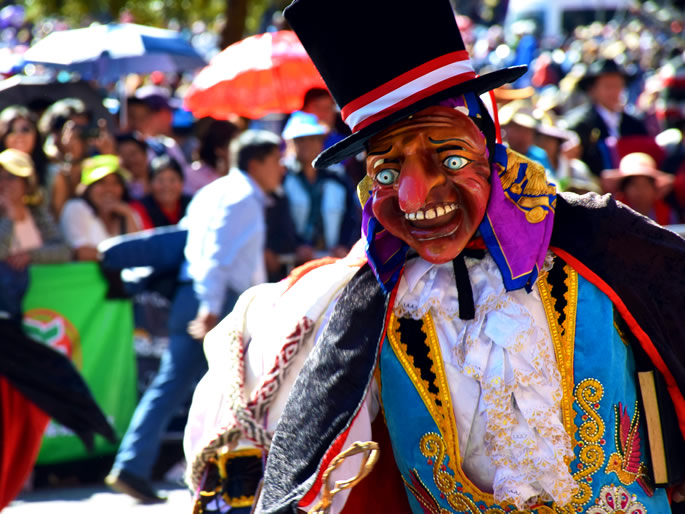