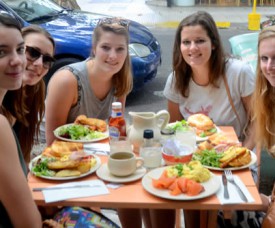 Where to find the Best Places for Brunch in Buenos Aires

The Argentina capital Buenos Aires is a city that has many options when it comes to places to eat. It doesn’t matter whether you are looking for a place to have breakfast, brunch, lunch or dinner, there is plenty of choice.

Personally, I really love to have brunch during my weekends in Buenos Aires and I like to try new places as well. After many brunches around the city during my Spanish courses and internship in Buenos Aires, I can truly say that you must visit some of these places!
END_OF_DOCUMENT_TOKEN_TO_BE_REPLACED 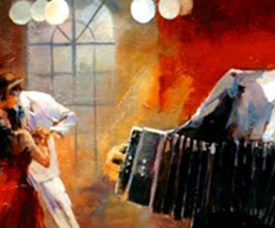 Susanne has been living and learning Spanish in Argentina for a couple of months and she loves the Argentine capital. “I have followed Spanish classes in Buenos Aires at AMAUTA and it has been amazing”, she says. “My Spanish has improved a lot. I love the location, and I love Buenos Aires. The city has so many things to offer and I love Argentine culture. In this blog, I will tell you more about Argentine culture and specifically, about Argentine music. Did you know that music is a great way to practise your Spanish skills? With Argentine accent of course. I really love Argentina music and I’m happy to share this list* of 11 Songs in Spanish you Must Hear with you!”

As strange as it may seem, Argentina is not all about food, but is about music as well! Throughout history, this country has produced some amazing musicians and artists. People are still playing songs from the “old” days in Argentina, when they created new ideas and opened up new worlds. It was similar to the influence that music has today, when musical styles like cumbia or pop music impact the public and their lifestyle. END_OF_DOCUMENT_TOKEN_TO_BE_REPLACED 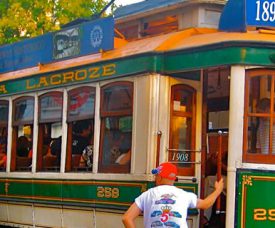 Of course, we want our students taking a Spanish Course in Buenos Aires to visit all the highlights of this beautiful city. They should visit all the amazing places that are on most “What to do and Best things to do in Buenos Aires” lists. BUT this city has so much more to offer than only the famous cemetery of Recoleta or an old tango show! Buenos Aires spreads itself out deep into the countryside and across the River de la Plata, which means that there is a lot more in Buenos Aires than meets the eye. The capital of Argentina has a unique character in South-America because of the European influences and even more the Italian immigration. The city consists out of many neighborhoods that all have their special charm and this creates so much diversity throughout. This and much more makes this city a perfect destination for Spanish classes in Argentina. In this article, we will show you the alternative and astonishing side of Buenos Aires in 8 Alternative Things to do in Buenos Aires.

END_OF_DOCUMENT_TOKEN_TO_BE_REPLACED 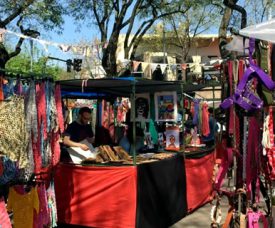 Treasure hunt: You will be surprised about all the things you can spot on the markets of Buenos Aires! Throughout the city you will find loads of flea markets, artisan fairs, second hand items, organic and food ferias and all of them will get you into the relaxing and cosy vibe Buenos Aires is famous for! END_OF_DOCUMENT_TOKEN_TO_BE_REPLACED 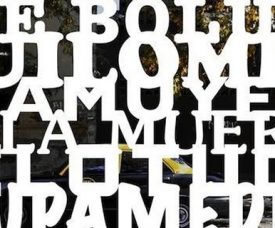 When in Buenos Aires, our newly arrived Spanish students who registered for a Spanish course in Buenos Aires, encounter the typical accent of the Argentine people who live there: the Porteños and the Porteñas. Over the years, the city of Buenos Aires has developed its own language, filled with “strange” Spanish words and a lot of slang. Moreover, the Spanish speakers of Buenos Aires are known for their constant chatter. Therefore, to get fully integrated into the Argentine culture, you might want to know some of those typical Argentine words or expressions that are used in this multicultural city! The following is a list of the most important and most used typical words and phrases by the Argentine people in Buenos Aires:
END_OF_DOCUMENT_TOKEN_TO_BE_REPLACED 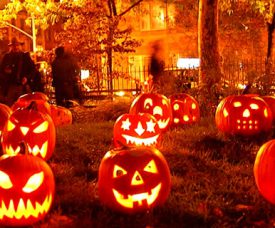 In Argentina, Halloween is called “Noche de Brujas” and even though the country is not known for extravagant Halloween celebrantions, people are still dressing up in Vampire and Zombie costumes. The capital city of Buenos Aires hosts many Halloween parties and events that are all about enjoying and celebrating this scary thrill. Buenos Aires holds a large number of foreigners residents – among them students learning Spanish in Buenos Aires, volunteers and expats – and travellers! Most of them are more than interested in celebrating this international day and having some fun. We made a list of a few parties on this freaky Friday (and Thursday)!! Halloween in Buenos Aires: let’s get your horror on!
END_OF_DOCUMENT_TOKEN_TO_BE_REPLACED 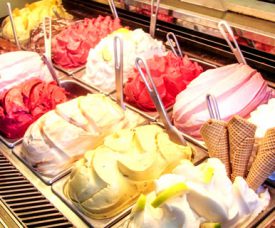 All our Spanish students know it, from their first day in the Argentine capital on: Buenos Aires is the capital of Ice Cream and a Haven for a Sweet Tooth!

Buenos Aires is famous for its gastronomy in general, and specially for the desserts, sweets and ice creams. And thus you will find loads of cafés, pastry shops and ice cream shops (heladerías) in this city. At most of these places, you will encounter the most delicious flavors. Buenos Aires is known for its high quality ice cream and it forms an important aspect of Argentine culture, since the Italian immigration during the 19th century. One of the favorite, typical Argentine flavors of many Spanish students at our school, is the famous “Dulce de leche”! This typical, (very) sweet ingredient is used in many cakes, pies, cookies and whatever sweet dish you can find in Argentina.

In this article, you will find an overview of the best places to satisfy your sugary needs while learning Spanish in Buenos Aires.
END_OF_DOCUMENT_TOKEN_TO_BE_REPLACED

Visit San Telmo for your multicultural Sunday in Buenos Aires 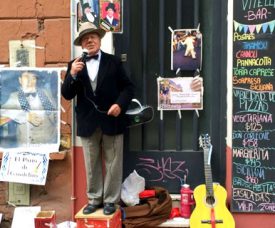 Visit San Telmo for your multicultural Sunday in Buenos Aires!

END_OF_DOCUMENT_TOKEN_TO_BE_REPLACED 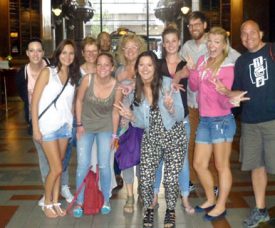 Mister Barolo and Italian architect Mario Palanti, were both big fans of Dante´s work. Therefore, they decided to dedicate a whole building to him which became the Barolo Palace in 1890, with Dante as their true inspiration. END_OF_DOCUMENT_TOKEN_TO_BE_REPLACED 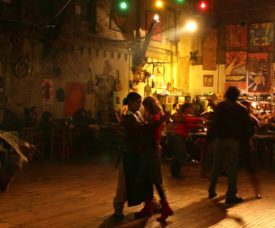 Would you like to learn to dance the Tango as a real porteñ@! How? Read it here in this blog about Tango Dancing in Buenos Aires.

There are many reasons for visiting the stunning Argentine capital Buenos Aires. Learning Spanish (more about Spanish classes in Buenos Aires) is definitely one; but learn How to Dance Tango is definitely another good reason!

Tango Shows
Buenos Aires has an enormous offer of tango shows, tango clubs and tango classes throughout the city. It does not really matter where you go, dancing the tango is always a lot of fun and the quality of tango dancing is, generally spoken, very high in in Buenos Aires.
END_OF_DOCUMENT_TOKEN_TO_BE_REPLACED