Argentina - History of the mass media

In spite of a long history of journalistic struggle, most notably the censorship of the press during the Peron dictatorship and the suppression of information about the disappearance of over 11,000 people by the military regime, Argentina has become home to one of South America's leading media markets since its return to democracy in 1983. It boasts over 200 daily newspapers, hundreds of commercial radio stations, dozens of television stations and a Spanish-language publishing industry on par with only Spain and Mexico. 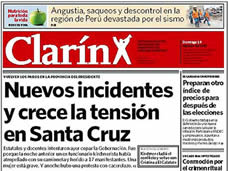 Although still respected for its independence, the media industry has consolidated into large conglomerates and there have been recent worries that the government influence over media is growing. The Grupo Clarín is currently the largest media conglomerate in Argentina, owning Clarín, Argentina's most popular newspaper, Página 12, the most prominent left leaning newspaper, Canal 13, the second most popular television station in Buenos Aires, several other special interest publications, three radio stations, numerous cable television stations and other communications ventures.

Argentina is home to over two hundred newspapers. In addition to Clarín, which distributes over 1 million copies of its Sunday edition, other mainstream newspapers include the conservative La Nacion, the business-oriented El Cronista and Ámbito Financiero, Argentina's oldest newspaper La Prensa dating from 1869 and the populist Crónica. In addition, there are a selection of foreign language papers including the well-respected English daily, the Buenos Aires Herald, Argentinisches Tageblatt in German, and Le Monde Diplomatique in Spanish and French. The regional press is also strong, and includes such notables as Los Andes in Mendoza and La Voz del Interior in Córdoba. Additionally, innumerable special interest magazines can be found throughout Argentina in street-side kiosks. 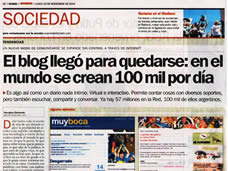 Likewise, the television industry in Argentina is thriving; there are five major networks, all larger cities throughout Argentina have at least one local station and the percentage of cable and satellite subscribers is on par with North America. Notable television stations include the state-run Canal 7, stations operated by Grupo Telefe including Canal 11, and Canal 13, among others, owned by Grupo Clarín. The majority of programs consist of futbol and other sports, telenovelas (soap operas), chat and game shows and news programs. Many cable networks operate within Argentina serving the Spanish-speaking world and, in addition, many locally produced programs are also broadcast in other countries.

Dating from 27 August, 1920, the Sociedad Radio Argentina issued the first Argentinian radio broadcasting and claims to be the world's first radio station. From such groundbreaking origins, today there are over 1,500 radio stations licensed in Argentina; the vast majority broadcast music and youth programs on FM channels, while news, debate and sports can be found on the AM network. Radio remains an important media and cultural format in Argentina, and is an especially important source of information in the more remote regions of the country.