Although Argentina has become known in recent years for its cosmopolitan fare, a major distinction in its cuisine exists: the cities, particularly Buenos Aires, embrace a modern fusion, while the more rural cuisine continues to rely heavily on traditional staples.

Argentinean beef is often said to be the best in the world perhaps explaining why Argentineans have the highest consuption of meat in the world per capita, averaging 150 pounds annually. Particularly in guacho country, consuming beef more than once per day is a common phenomenon. Argentinean beef is grass fed and has a tougher texture, less fat, more muscle, and a stronger flavour than corn fed cattle. Beef can be ordered asado, or barbequed, a la parilla, grilled, braised, stewed, fried or stuffed and is often served with potatoes, vegetables and chimichurri sauce (parsley, olive oil and garlic, among other ingredients). The restaurants specialising in barbeque (parrillas), feature large open grills often displaying a variety of meats in the process of being cooked. In a testament to Argentina's dedication to meat, apart from beef, chorizo, or pork sausage, lamb, pork and chicken can all commonly be ordered.

Nonetheless, Italian classics, vegetables and salads also feature prominently in Argentinean cuisine. Pasta selections such as tallarines (fettucine), ravioles, noquis (gnocchi) and canelones are common fare. Other classics include empanadas, which are small pastries, which can be filled with such ingredients as meat, cheese and vegetables, and milanesas, or fried and breaded meat, often served as snacks or in sandwiches with papas (potatoes). More traditional meals include the puchero, a casserole made from various meats and vegetables, such as corn onions peppers and potatoes and carbonaba, beef stew of corn, squash, rice, sweet potatoes, apples and pears.

To finish of the meal, postres (desserts) are certainly not lacking. Flan, dulce de leche, or a type of caramel, and alfajores, shortbread cookies layered with dulce de leche, are Argentinean favourites. Also available and very popular is the helados, or ice cream, which takes its tasty heritage from the Italian gelato.

Another staple of Argentina is yerba mate, a bitter caffeineited tea that is usually brewed loose-leaf in a mate, or a hollowed out gourd, through a bombilla, or a metal spoon. Not unique to Argentina, it is also popular throughout Uruguay and other parts of South America. Argentineans carry their mate cups throughout the day, and often share their mate in a typical custom of friendship. Depending upon the style of the region, it is unsweetened or sweetened and flavoured with additional herbs. 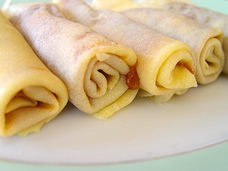 Buenos Aires has developed in recent years as a gastronomical destination, and the barrio Puerto Madero has become its capital. Buenos Aires embraces European cuisine with a local touch and is described as criollo, or creole, or porteno. Not only serving classic and modern versions of meat, Buenos Aires can easily accommodate more ethnic tastes and vegetarian preferences.

By and large, Argentina’s food is less spicy than many of its neighbours, however there exists great diversity within the country. The Northwest area retains a stronger pre hispanic influence and incorporates many types of indigenous vegetables; the northeast partakes in much more rice and freshwater fish while providing yerba mate to the rest of the nation; parts of Patagonia have a Welsh influence; and the southerly coast consists of a large amount of seafood, often consumed in an Italian style.

In addition to a vast array of gastronomical choices, Argentina is also home to a thriving wine industry and claims a tradition in winemaking dating back to the mid-sixteenth century. However, it was not until the 1980s that Argentinean wine blossomed into what it is today. Fertile land, variable altitudes and a wide temperature range contribute to the high quality of the wines being produced.

If you like your beer, Argentina has a wide range available. While the domestic beers such as Quilmes and Isenbeck are average, you can find some great micro-brewed beers from breweries such as Antares and Barbaroja. Foreign beers such as Heineken and Budweiser are widely available.

It could be said that beef is to Argentinean food, what Malbec is to Argentinean wine. While the Malbec grape, a European variety that was never successful in France, is the best known, cabernet Sauvignon, Merlot and Syrah are other widely grown red grapes. The white Torrontes grape, originally from the Mediterranean region, is quite popular in Argentina, in addition to Chardonnay and Sauvignon Blanc.