The third dance in the history of dance (done with the man and woman facing each other) is the Tango. It consists of the man holding the woman’s right hand in his left, while his right arm is around her. The first dance done in this position was the Viennese Waltz, a craze which spread across Europe throughout the 1830s. This was the first form of couple dancing after the traditional dances of couples with highly choreographed steps. The second dance was known as the Polka and was the next craze throughout the 1840s. Finally the Tango evolved into the third dance of its kind which greatly varied from anything before its existence, because it introduced the concept of improvisation for the first time. 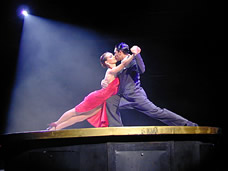 Tango soon had a great influence on all of the couple dancing in the twentieth century. It’s evolution was due to the great amounts of immigrants coming into Argentina which brought an array of new dancing with shocking new holds. It is, however, unknown as to how and when exactly the Tango evolved from the Viennese Waltz and the Polka into what it is today. This is due to the fact that the Tango was primarily created by the types of people who are generally not written about in history—who leave no prominent mark except for dying in wars. These people were the poor and underprivileged who helped the evolution of the Tango.

The first piece of music written and published in Argentina describing itself as what we know as the Tango appeared in 1857. It was called, “Toma mate, che.” The name “tango” at the time probably referred to what is known today as “Tango Andalz” or “Andalucian Tango” which was the style of music brought over to South American from Spain—also the home of the Flamenco, another popular type of music in Buenos Aires in the middle of the nineteenth century.

There are many theories of how the word "tango" came to be. One such theory is that it came from the community of African slave descendents who mixed the name of their god of the drum with the Spanish word for drum, “tambor.” However, this theory has not been accurately proved, as there is no proof of African dances being involved with a man and woman in the same form as the Tango. On the contrary, African people in Buenos Aires joined in and influenced the development of the dance and music, as did vast amounts of other immigrant communities. The most important groups of people in the evolution and development of the Tango were the poor, the undereducated, and the underprivileged white men. Finally, Tango was sung in theatres throughout Buenos Aires during the second half of the nineteenth century.

Its emergence in popularity led it to Europe in the early 20th century, where dancers and orchestras from Buenos Aires traveled to European cities such as Paris, London, Berlin, and other major capitals where the Tango craze was then born.

However, the onset of the Great Depression in 1929 led to the decline its popularity throughout Argentina. New governmental restrictions were introduced after the overthrow of the government creating a lack of Tango. After Juan Peron became president, the popularity of the Tango rose again, making it yet again fashionable throughout the country. 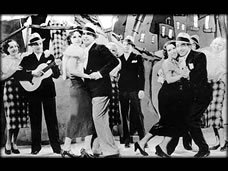 The best known cliché of the origin of the Tango is that is was born in the brothels of Buenos Aires. The idea is that brothels were the general place that the middle class people encountered this kind of music and style of dance. This was due to the fact that with a great shortage of women in Buenos Aires, prostitution was a thriving industry. Brothel owners then hired Tango musicians in order to entertain the waiting men. The musicians played the music of the poor, however the brothels were some of the few places that could afford to employ professional musicians. The waiting men would dance together while the musicians would play.

During the middle of the nineteenth century, the British decided to open a railway network across Argentina. This made possible the transportation of agricultural products for the potential of export, as well as the exploitation of mineral resources. Workers were necessary to work the railroads, leading the Argentine government to advertise for the need of workers from Europe. An avalanche of immigrants began coming to Buenos Aires, most of which being men hoping to work a few years to make enough money to return home to Europe.

Money was not found and the work was hard and there was a great lack of women. The only way for men to get close to the few women found throughout Buenos Aires was through brothels and prostitution or through dancing the Tango. Given the high competition amongst men for the women, the only way to dance with a woman was if the man was a good dancer. Good dancing was achieved through practicing with men together in order to have enough confidence and style to dance with the non-prostitute women.

Dancing was not born in brothels, but rather in courtyards and residential neighborhoods where the poorer classes lived. Due to large amounts of people living in the same buildings, there was bound to be guitar, flute, and violin players to create music to dance to. Music and dance then became the common language for the varying cultures to unite through. And because of the different music and dance styles from various immigrants, the evolution of Tango was greatly helped along.

Today in Buenos Aires, three different forms of the Argentine Tango can be found: Salon, Fantasia, and one created specifically for the stage. Due to the creation of other new dances of the time, a great amount of influences have been shaping the way the Tango is today—the stage Tango, for example, having been created specifically to get North Americans interested in the dance. After Tango stage shows, classes and demonstrations are offered for the viewers, however it is recommended to learn the traditional Argentine Tango as opposed to learning the choreographed steps of the stage Tango.