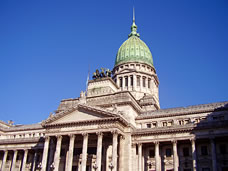 The constitution of Argentina was established in 1853 and later revised in 1994. It mandates a separation of power into executive, legislative, and judicial branches at the national and provincial level. Each province then contains its own constitution, roughly mirroring the structure of the national constitution.

The president and vice president of Argentina are directly elected for four year terms. Both officers are limited to two consecutive terms and are allowed to stand for a third term or more after an interval of at least one term. The constitution grants the president considerable power, including the power to appoint cabinet ministers, the authority to enact laws by presidential decree under conditions of "urgency and necessity" and the line-veto.

The constitution establishes the judiciary as an independent government entity, allowing the president to appoint members of the Supreme Court with the given consent of the Senate. The Supreme Court, however, also holds the power to declare legislative acts unconstitutional.

The MERCOSUR is present in Argentina where it serves as a customs union that includes Argentina, Brazil, Paraguay, Uruguay, and most recently Venezuela. Between these countries is an established international trade policy. Chile and Bolivia are associate members, whereas the corporation between Argentina and Brazil is key to MERCOSUR’s broader integration agenda concerning political and military elements. The organization is also seeking trade negotiations with other countries and communities such as India, Andean Community, and the European Union.