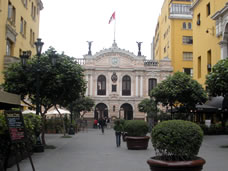 Like in all countries of the world, communication plays a decisive role in Peru, in both the cultural and political life.

Along with serious and fact oriented communication, in recent decades other forms of media have arisen such as “easy reading” which are of doubtful quality and creditability – they are also the cheapest and most accessible to those in the lowest economic bracket.

The television is also very diverse. There are few free channels, but these are also the most wiedly watched by the people – one of these is RTP, Channel 7, administered by the state. The Ministry of Education has arranged a system of evaluation and control of television programming that has made changes and in some cases, shut down certain programs.

“The radio is closest to the people” is the motto that all Peruvian radio stations repeat in their programs. In Peru, a lot of people listen radio – at home, at work, and in the buses. The radio stations most listened to are those that include a wide variety in their programs: news, art, gossip, music and interviews. There are two radio stations that dispute the top spot at a national level: RPP (Radio Programas del Perú) y CPN (Cadena Peruana de Noticias).