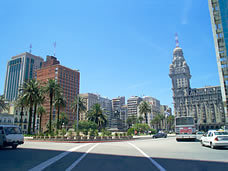 Bordered by the enormous expanses of Argentina and Brazil and by large rivers and the Atlantic Ocean, Uruguay is located in a privileged setting in South America. The pure white sandy beaches, the dunes and creeks, and the small bays with peaceful waters astonish people. Due to its excellent climate, Uruguay is a perfect place to visit any time of the year, and its outstanding weather makes it an even more perfect place to study Spanish. The average temperature in summer is 25ºC/ 78ºF and in winter 12ºC, 53º.

Spanish is the only language spoken throughout the country, demonstrating the uniformity of the population and the cultural and ethnic unity - characteristics that have helped to develop a tolerant and democratic country - and that will help you to learn Spanish quickly. In fact, the capital city, Montevideo, has recently been declared the second safest capital city in the world. Security is also complemented by the high standard of health in Uruguay and its complete sanitation system.

Montevideo is one of the only continental capitals with a ring of beaches incorporated into the urban landscape. This singular feature has given the city's appearance a special character and serves as a "purifying lung". The city maintains historic testimonies both in its old and new sectors. Old mansions that once belonged to notable citizens have been turned into museums, magnificent monuments, the Legislative Palace, countless plazas, promenades, sculptures and wide avenues that immediately capture the visitor's attention due to their charming harmony of form and elegance.

All these wonders are complemented by big parks, which are used for cultural events, book fairs, markets or the Montevidean Carnival, which lasts for more than 40 days. The first class maritime terminal is a magnet that concentrates the commercial, industrial and cultural development of the whole country and is the gateway to several tourist attractions in the country.

Montevideo is a beautiful, green city that also offers a wide range of cultural and sporting activities. There are many high standard sport clubs, where visitors can communicate with and spend time with locals. When you choose to study Spanish in Montevideo, you will have the opportunity to become familiar with all Uruguay has to offer and you’ll learn Spanish fast.

Our partner Spanish school in Montevideo is situated in "Parque Rodo”, a well-known, quiet area only 5 minutes walking distance from the city. It is in a beautiful, old house with large classrooms, a library, a fully equipped kitchen, a common room and a terrace, and the school residence is located on the second floor. Be sure to reserve your room a couple of weeks before as the residence tends to be fully booked! Our Spanish classes are entirely in the Spanish language (immersion method) and run throughout the year. There is a maximum of 6 students per class, and all Spanish classes are offered at all levels so that we can match you to the correct Spanish course. 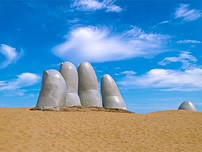 A sculpture of a hand 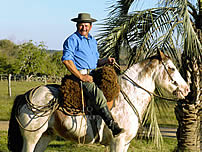 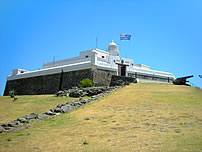